Posted on January 11, 2018 by theoldperfessor 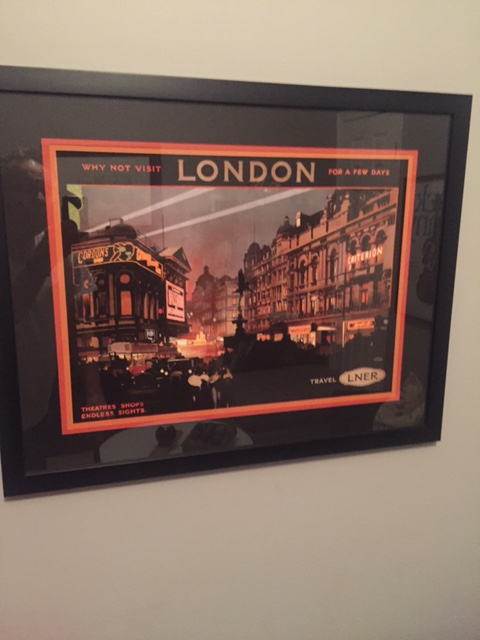 My wife Jayne and I have the poster above in our TV room as a reminder of our favorite city  in the world. And we took its advice and visited London for a few days (10 to be exact) after Christmas — accompanied by 23 Wingate University students and one of my colleagues as part of our school’s Winternational program.

About every three years since the turn of the Milennium, I’ve had a proposal accepted for this program, in which faculty members select an international destination and teach a course on a topic related to it, followed by a trip there at the end of the semester. London has always held a fascination for me as a world center of media, business and culture and my course deals with the role of news media and communication in British society.

I’ve called it “Ghosts of Fleet Street,” which sounds more lurid than the course actually is, referencing the former home of newspapers in London. It was another good trip with another good group of young people and I thought some highlights of it were worth sharing, so here goes:

Despite what the classic cruise ship ad said, getting there isn’t close to half the fun on an international flight and we arrive at Heathrow Airport on the morning of Dec. 30 a little tired but ready for adventure — it’s been the first time that a couple of students have ever been on a plane, but you wouldn’t know it.

We get to our hotel in Central London, the St. Giles, which truth be told is rather non-descript — it’s a former youth hostel, we find out this time — but it’s in a great location not far from the Tottenham Court Road station on the Underground. After stowing our luggage for later check-in, the group heads for the day’s tour, a visit to the Tower of London, highlighting some of the darker moments of the city’s history.

(I hate to adopt a “been there, done that” attitude towards — as I said — one of my favorite cities in the world, but this isn’t going to be a complete travelogue. So feel free to do your own research on what I leave out.)

After hotel check-in and a chance to freshen up, there’s a welcome dinner for us at a gastropub in South Kensington and then back to the hotel for some much needed rest.

The last day of 2017 is a busy one, starting with a Thames River cruise over to Greenwich and a visit to a quirky little place called the Museum of Brands, Packaging and Advertising — a place which I suspect a lot of Londoners wouldn’t be able to find in the Portobello Road area. It’s the brainchild of a London advertising agency man named Robert Opie, whose collection of ads and supermarket packaging dating back to Victorian times provided the starting point for the museum more than 30 years ago. It’s a fascinating look at the development of consumer culture. 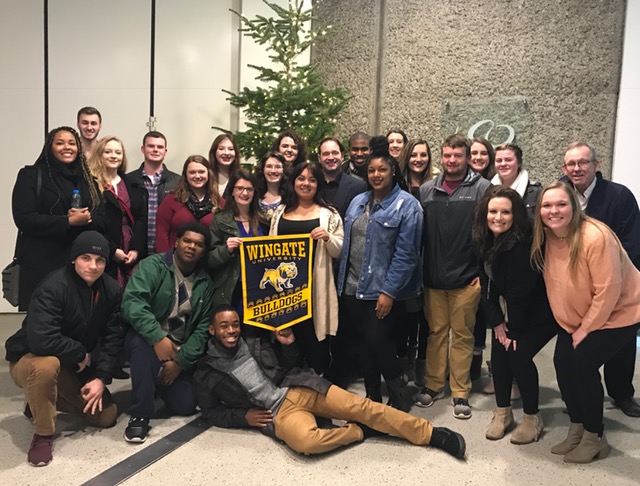 For our last couple of trips here, we haven’t arrived in the city until New Year’s Day, so we’ve missed out on a really charming London tradition, a New Year’s Eve concert of Strauss music by the London Symphony Orchestra at the Barbican Centre. (That’s me with my class before the concert.) It’s as rollicking and fun as I remembered it, ending with the audience joining hands and singing “Auld Lang Syne” at the end.

I figure that the music students we have on the trip are going to enjoy this, but it seems to go over well with the group as a whole. And I am reminded that it’s a good idea not to make assumptions about shared culture when we deal with young people. One of my students asks me about the song as we leave. “It’s ‘Auld Lang Syne.” It’s an old traditional New Year’s song,” I say.

“Yeah, I know that,” the student says. “But are we supposed to know the words?”

When 2018 actually gets here, Jayne and I are in a 24-hour restaurant adjacent to the hotel, which turns out to be a regular gathering place for our crowd. Smiles and “Happy New Years” all around with mostly total strangers. It’s a nice moment and a cool way to turn the page.

For the next two days, we’re pretty much at leisure, with only a stop at the Victoria and Albert Museum on New Year’s Day afternoon officially on the schedule. It’s my favorite museum in London, to me much more accessible than the gargantuan British Museum. It’s focus is decorative arts and design and I enjoy the occasional exhibits about media and printing.

The next day is a free day. Jayne and I spend part of it at Fortnum & Mason, purveyors of tea, coffee and food at their Picadilly location since 1707. We take a leisurely afternoon tea with delicious sandwiches and pastries and a friendly waitress from Romania, and head back to the hotel to get ready for our evening’s entertainment.

We’ve bought tickets to the Dominion Theatre’s production of “An American In Paris,” less than a five minute walk from our hotel. It’s in the last couple days of its holiday run. It’s a wonderful adaptation of the 1951 film of the same name which won the Oscar for Best Picture that year. Great songs by George Gershwin and marvelous dancing.

And this evening we’re treated to one of those theater moments you thought only happened in the movies. About 30 minutes into the show, there’s a break in the action and it’s announced that the female lead has taken ill and will be replaced by her understudy. It’s a seamless transition, as it turns out the back-up is more than ready for the spotlight. 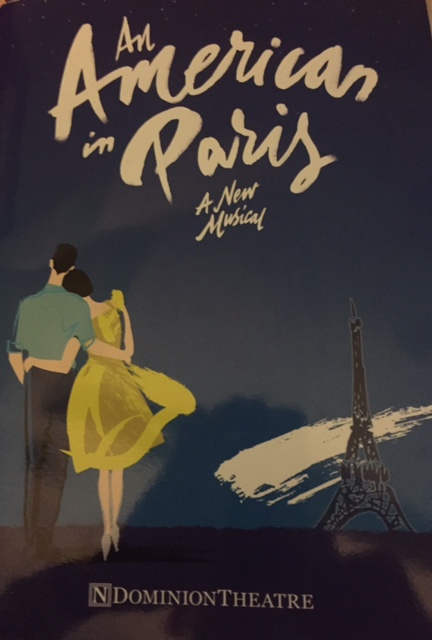 We buy a program (pictured above) and I always wonder whether 10 years from now we’ll have the “I saw them when” moment when one of these actors and actresses will have hit it big.

The students have — as I encouraged them during our preparation for the trip — not wasted their off day. One tennis aficionado took the Underground out to Wimbledon to visit the museum there. And about half of them figured out how to get to Windsor Castle on the train to see the royal residence.

They’re proving to be resourceful, self-reliant and even intrepid — as important in many ways as their having familiarity with the course material. And that makes me happy. More to come.